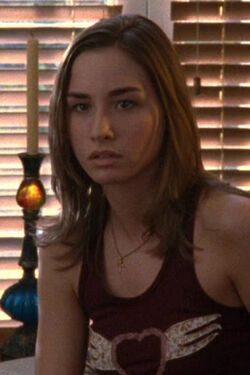 Episode Count
3
First Appearance
With Tired Eyes, Tired Minds, Tired Souls, We Slept
Last Appearance
The Runaway Found
Name
Abigail Brown
Nicknames
Abby
Occupation
Unknown
Status
Alive
Family Members
Hope Brown - Mother
Appearances
S1, S2, S3, S4, S5, S6, S7, S8
Resides In
{{{Lives}}}
S1, S2, S3, S4, S5, S6, S7, S8
Abigail "Abby" Brown was a former Tree Hill High School student. She was the only person that witnessed Dan Scott kill his brother, Keith Scott. She saw Dan kill Keith through the blinds of a classroom. Abby wanted to tell somebody about what she saw in the hallway the day of the shooting, but her mother, Hope Brown wouldn't allow it because she wanted to protect Abby. Her mother made her act crazy whenever someone came inside their house so that nobody would suspect Abby knew the truth about Keith's murder. Abby couldn't return to her regular life which included school, friends, and being a normal teenager because of what she witnessed. Abby only tells two people who killed Keith, her mother and Lucas Scott. After telling Lucas what happened, she and her mother left and never return.

Abigail Brown was the only daughter of Hope Brown who suffered from serious diabetes. As a student at Tree Hill High School she was a quiet girl who enjoyed school and had her own friends, but didn't take notice of some of her classmates such as Jimmy Edwards ("With Tired Eyes, Tired Minds, Tired Souls, We Slept").

On the day that Jimmy Edwards brought a gun to school after the time capsule release, Abby rushed to the tutor centre with her fellow students Haley, Rachel, Skills, Marcus and the shooter Jimmy who kept his identity secret from the rest of the students in lockdown with him. When Mouth and Nathan arrived at the Tutor Centre and prepared to help everyone leave the school, Jimmy revealed himself to Abby and the students by pulling a gun on them. While holding the seven students hostage, Abby questioned why he was doing this and to prove his point Jimmy asked Abby what his name was, and she was unable to answer. While everyone else tried to talk Jimmy out of holding them hostage, Abby remained quiet and reserved until Marcus confronted Jimmy saying that he hoped the police "fry Jimmy's ass". Abby was the first to see Jimmy's side, telling the students that they are just kids and none of this shouldn't be happening to them.

Abby's diabetes started to become a problem when her insulin levels dropped and, because she was being held hostage, she couldn't get to her insulin in her locker. Haley eventually noticed Abby's declining health and when she discovered she was diabetic the students protested for Jimmy to let her go and Jimmy eventually agreed. Jimmy eventually revealed to Abby that there aren't any other shooters, and she would be safe in the hallway ("With Tired Eyes, Tired Minds, Tired Souls, We Slept").

Abby, however didn't leave the school after getting her insulin as she didn't believe Jimmy and thought there were other shooters. She took refuge in a classroom and watched as Keith Scott tried to help Jimmy, who eventually turned the gun on himself and killed himself. She then watched in horror as Dan Scott arrived and killed Keith, his brother. After what she saw, her mother pulled her out of Tree Hill High for her own protection but Abby didn't feel safe, and so started sending Dan messages informing him that someone knew of what he had done in hope that he would turn himself in. Her first threat to Dan came about when she painted the word "Murderer" on the wall of the beach house ("The Show Must Go On") ("You Call It Madness, But I Call It Love") ("The Runaway Found").

Abby continued to send Dan messages, her second being the words "Genesis 4:10" on the wall of his office causing Dan to try and work out who knew about the murder, suspecting Whitey and Lucas but not Abby ("I Love You But I've Chosen Darkness").

On the day of the school prom, Abby was in attendance and continued to send Dan messages, such as one asking if his date Karen knew that he killed her fiancé. Abby believed that no one knew she witnessed the murder or was sending the texts, but unaware to her Lucas Scott, who had been reliving what happened in the corridor after a cryptic dream in which Keith forced him to really see what happened that day, had discovered that she witnessed the murder and was now searching for her in order to find the truth. Lucas eventually tracked Abby down, but both were unaware that Dan also knew that she witnessed Keith's death and knew where she was ("You Call It Madness, But I Call It Love") ("It Gets the Worst at Night").

When Lucas approached Abby at her house he was at first lied to by her mother who said that there was no Abby at that address but he knew her mother was lying when he saw her watching him out of the window. When Hope left the house, Lucas took the opportunity and broke in and came face to face with Abby who couldn't lie to Lucas when he asked if Jimmy killed Keith. However, Hope returned and intervened before Lucas could ask her anything more. Abby revealed to her mother that she wanted to tell the truth about what she saw but her opinion soon changed when Dan showed up at her house and tried to persuade her that she made a mistake and she didn't see him kill Keith. Abby, for the first time, admitted to Dan what she saw and told him that he couldn't escape it. Having been threatened by Dan, Hope decided to move her and Abby away from Tree Hill for good but Abby couldn't leave without telling Lucas the truth and went to his house. She revealed that Dan Scott killed Keith ("The Runaway Found").

Abby was educated at Tree Hill High School until mid-way through her senior year. After witnessing Dan kill his brother Keith, Abby was pulled out of school by her mother for her own protection. She didn't graduate with the rest of her class as she departed Tree Hill mere weeks before the seniors graduation. However, she was in attendance at the Prom for her class so she may have still had some involvement with the school despite not physically attending (although her presence there may have been part of her plan to force Dan to turn himself in).

Retrieved from "https://onetreehill.fandom.com/wiki/Abby_Brown?oldid=65845"
Community content is available under CC-BY-SA unless otherwise noted.