Start a Wiki
watch 01:50
The Loop (TV)
Do you like this video?
Amanda Schull 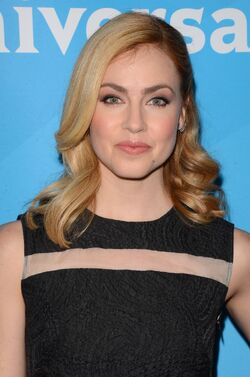 Amanda Schull (born August 26, 1978) is an American actress and former professional ballet dancer. She is best known for her lead role in the 2000 film Center Stage and for her recurring roles on One Tree Hill, Pretty Little Liars, and Suits. She currently stars in the Syfy television series 12 Monkeys. Schull was born in Honolulu, Hawaii. She attended Punahou School and trained at Hawaii State Ballet under the instruction of John Landovsky.

Schull was offered a full scholarship to Indiana University for ballet. While at Indiana University, she joined Delta Delta Delta. During her sophomore year (as a ballet and journalism major), she attended the San Francisco Ballet School Summer Intensive. SFBS subsequently offered Schull a scholarship to continue her studies for an additional year.

When Schull's year-long scholarship ended in 1999, San Francisco Ballet's artistic director offered her an apprenticeship which she accepted. After filming Center Stage, she subsequently joined SFB as a full-time member of its corps de ballet.

Schull was cast in the starring role of Jody Sawyer in the 2000 movie Center Stage while still an apprentice with the San Francisco Ballet. Later that same year, she was cast as Davina Mayhan, the title character's older sister on the hit YTV sitcom My Family and Me.[citation needed] She portrayed the character from the show's third season to the last.

In April 2006, Schull retired from San Francisco Ballet. In May 2008 she went to Australia to film the movie adaptation of Li Cunxin's Mao's Last Dancer.[1] In Mao's Last Dancer, released in North America in 2010, Schull has a major role as Elizabeth "Liz" Mackey, the girlfriend (and later, first wife) of Li Cunxin.

In 2009, Schull had a guest star role on the Fox TV show, Lie to Me (season 1, episode 4). The same year, she was seen in the Lifetime Movie Sorority Wars starring Lucy Haleand Courtney Thorne-Smith. She also guest starred on The CW's One Tree Hill as Sara Evans, the spirit and memory of the deceased wife of Clay (played by Robert Buckley), and also as Clay's wannabe lover who bears a striking resemblance to Sara—Katie Ryan. She guest starred in an episode of Ghost Whisperer (Greek Tragedy) in 2009, and episode 14 ofBones, in 2010. Schull recurringly appeared as Meredith, who is Aria's (Lucy Hale's character) dad's former lover, in the ABC Family series Pretty Little Liars. She also appeared in an episode of Hawaii Five-0. In March 2012, she appeared in a McDonald's commercial for the Shamrock Shake and in April she guest starred in an episode of Psych. Also in 2012 she appeared in an episode of "Grimm" as Lucinda, a character who resembles Cinderella, but with a twist. Since 2013, she has appeared in the recurring role of Katrina Bennett in USA's Suits.

In November 2013, Schull was cast as Cassandra Railly on the television series 12 Monkeys, based on the 1995 film of the same name. The show premiered January 16, 2015.

Retrieved from "https://onetreehill.fandom.com/wiki/Amanda_Schull?oldid=65471"
Community content is available under CC-BY-SA unless otherwise noted.