B. Davis Couture (also known simply as B. Davis) was a fashion magazine run and owned by Clothes Over Bros. The magazine discusses fashion, beauty, and personal health. The magazine's founder and namesake, Brooke Davis, graced the covers of several issues of the magazine herself.

Victoria Davis was the one to come up with the initial idea for a fashion magazine. Despite her initial skepticism, Brooke was sold on the idea by her mother after Lucas Scott came to New York to edit his book.

Brooke's best friend Peyton Sawyer was a frequent reader of the B. Davis magazine. She would purchase a copy of the magazine every time she noticed a new issue as a means of feeling connected with Brooke, much in the same manner as she did with Lucas's book. 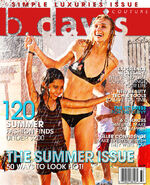 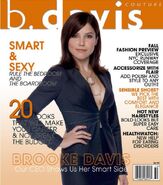 Add a photo to this gallery

Retrieved from "https://onetreehill.fandom.com/wiki/B._Davis_Couture?oldid=59919"
Community content is available under CC-BY-SA unless otherwise noted.