Start a Wiki
watch 01:11
The Loop (TV)
Do you like this video?
Between Raising Hell and Amazing Grace 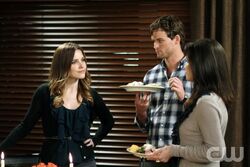 "Between Raising Hell and Amazing Grace" is the ninth episode of the eighth season of One Tree Hill and the 161th produced episode of the series. It was broadcast on November 16, 2010. The gang gathers at Nathan and Haley's to spend Thanksgiving with their friends and family.

Haley is fixing up a table, preparing for her family's Thanksgiving dinner. Brooke is multitasking cooking dinner and preparing her turkey, which she becomes disgusted about having to hollow it out. Brooke pulls her apple crisp out of the oven and Sylvia comments on there being an apple peel inside, as Brooke realizes that she was supposed to add peeled apples instead. Jamie, Nathan and Clay play football as Clay tells Nathan he has to take a test to become a certified sports agent. Skills prepares Thanksgiving dinner for him and Mouth as Mouth watches the Macy's Day Parade, missing Millie. Millie shows up at the apartment and Mouth talks to her, admitting that he was jealous of her and the guy she met at the Halloween party at Tric and invites her in to watch the parade with him. Nathan, Jamie and Clay come inside and are shocked at the huge amount of food that Haley has prepared in case other guests arrive.

Chase bangs on several glasses with a fork at Tric, making music as he smiles happily. Clay and Nathan discuss the transcripts that Clay needs and Nathan tells Clay that he never graduated from college and was a few credits short. Clay tells him that it is important he graduates because he needs a college degree to become a sports agent and it is worth it since Nathan is a good sports agent. In the kitchen, Brooke asks Haley if it is okay if she invites Alex, but Haley thinks it is a bad idea since she has already invited Mia and learns that Brooke has also already invited Alex. Alex and Mia show up at the door and glare at each other in disgust. Clay, Nathan, Julian, Mouth and Skills play cornhole as Skills tells them he is attracted to Sylvia, surprising Julian. Erin and Jamie talk as she tells Jamie that she doesn't talk to her parents much anymore and they don't get along very well as Haley overhears. Millie goes into the kitchen and apologizes to Brooke for everything that happened with the fraud charges. Brooke accepts her apology and says that she has issues with Victoria. Nathan and Haley discuss the situation with Nathan having to go back to college in order to become a certified sports agent, as school was never easy for him. Haley assures him that he will find a way and will be fine. In the kitchen, Sylvia offers Brooke, Haley and Millie wine as Victoria arrives and surprises Brooke.

Victoria and Brooke argue as Sylvia introuduces herself to Victoria and immediately bonds with her, inviting her to stay. Chase pours various drinks at Tric, referring to them as cranberry sauce, pumpkin pie and stuffing and becomes choked at the strength of the stuffing drink. Jamie, Nathan, Clay, Julian, Skills, Mouth, Millie, Alex, Brooke, and Erin prepare to play backyard football and pick teams. As the game starts, tensions begin to rise between Alex and Mia and take a turn when Alex clotheslines Mia to the ground while she is running and they begin to fight until Nathan and Julian break them up. Quinn shows up and is happily greeted by Jamie, Clay and Haley.

Clay and Quinn kiss as Quinn tells him she wants to go home, and Clay reluctantly gives in. Chase continues to drink at Tric and begins to make turkey noises as a bar patron unknowingly comes in and leaves out. Quinn tells Haley that she will fill her in on the safari but that she wants to go home as she is exhausted and Haley gives her a plate of food for her and Clay to take home. They embrace as Quinn tells Haley she is thankful for her. Everyone gathers in the dining room with ther food as Haley begins the tradition of going around the room and saying what everyone is thankful for. During Alex's turn, she and Mia begin to insult each other and Haley makes Jamie switch seats with Mia to avoid anymore conflict. Victoria and Brooke begin to argue as Haley and Nathan excuse themselves. Sylvia says that she is thankful for her son and being able to bring Brooke and Victoria together as Sylvia reveals that she invited Victoria over. Victoria and Brooke continue to argue as Haley interrupts, saying that they all have a lot to be thankful for and that she wishes her mom could be there so she could have the chance to make it better and that Alex and Mia shouldn't be fighting over a boy as they have everything they could ever want and to focus on the things that they do have.

Alex and Mia continue to argue over Chase as they fight over who should take him a pie. Julian resolves the issue by showing them the tape of who Chase says he likes. Alex and Mia watch the tape and Chase says that they are both amazing girls, but he doesn't want a girl who lies to him and who breaks up with him through text and wants to be alone for a while. Alex and Mia are shocked as they thought he would have chosen the other. Brooke and Haley talk about Victoria and Haley advises her to take the chance if she thinks their relationship can be better because there may not be anymore time. Sylvia and Victoria tell each other goodbye, and Brooke tells Sylvia that she appreciates her being helpful, but that she doesn't have to do it all the time. Sylvia says that she just wants everybody to be happy, and Brooke says that because she has Julian, she has already given her a lot of happiness. Haley gives Erin some leftovers, as Erin tells her that it meant a lot to be invited over and to be surrounded by people that really care about each other. Haley brings up overhearing her telling Jamie she doesn't talk to her parents at all. Erin tells her it is because her parents didn't believe in her music and told her that she was just wasting her time and that she told them she couldn't respect parents that couldn't support their child's dream.

Mouth and Millie sit on the couch, reflecting over the nice day and kiss as they laugh at the Farm Fresh turkey, still gobbling in their apartment. Quinn wakes up in the middle of the night and tells Clay she is going to develop some pictures from the safari and that she is really excited. Brooke and Julian stare at the ruined turkey and she tells Julian that she learned that the most important people in your life don't go away and that he is still there. He assures her he isn't going anywhere.

Nathan and Haley are sitting by the pool as her and Jamie break the wishbone, finding out they broke off pieces of the same size and both their wishes will come true. Haley tells Nathan that he has so much determination and that she wishes that he would believe in himself as much as she does. Quinn goes into her darkroom and develops pictures of animals from her trip. She then begins to develop and hang up pictures of Katie, revealing that Quinn has managed to track her down during the safari trip.

"Maybe we could scrape it off."

"I don't get it. Haley's cooking for a small army, and it looks like a butterball commercial."

"Okay, uh we have tons of food, so please dig in. And, uh, also we have a tradition at our house of going around the table and saying what we're thankful for... I'll start. Um, I'm really grateful to be surrounded by such amazing friends and family, and uh, I'm really glad that you're all here."

" Okay, I think what we mean to say is that we're so grateful for what we have because we've been through so much this year, so many things that were not easy and things that make you realize you're all grown up and on your own. Hopefully we came out the other side stronger and with the realization that we really do have a lot to be grateful for. I-I just want to say that I wish my mom was here, because even if it felt bad, I would have the chance to make it better. And you two, fighting over a boy when you've got the whole world at your fingertips... are you crazy? What some of us wouldn't do to be living our dream. So, maybe instead of focusing on what we don't have, we can focus on what we do have."

"I leave and all hell breaks loose."

"Hey. We're heading out. Thanks again for having us."
"I'm so glad you came."
"Hales, I'm really sorry that your mom isn't here. She would be really proud of you. You are so much like her."
"Thank you. Well, she's never very far. She's in my heart."
"You must think I'm awful for fighting with Victoria. I just... I wasn't prepared to see her today, and I'm not ready to forgive her yet."
"I...I totally understand. But if you think you can fix it, do. Don't waste a lot of time, you know. You might not have it."
"Okay. Anyway... I'm so thankful you're such a good friend."
"I'm thankful I got to watch you chug wine of a bottle. Classy. Bye. Love you."
"Love you, too."

"Well, that was lovely, don't you think?"
"Yep. Lovely."
"She just got out of prison, and I thought you would want to see her."
" No, not really. Not at all, actually."
"Well, I guess I was wrong."
"Yeah. Sylvia, I know that you mean well. And I really appreciate it, but you don't have to be so helpful all the time."
"I just want everybody to be happy."
"I know, and if it weren't for you, I wouldn't have Julian. So you already gave me a lot of happy."

"You know, everything that happened... Maybe it's okay in a way. I learned the important people, the important thing, they don't go away. You're still here."
"And I'm never gonna leave."

"Listen to me. About school...You have more determination than anyone I know. And I really, really believe in you Nathan."
"Well, that means everything."
"You want to know what I wished for?"
"Yeah."
" I wishes that you would believe in yourself as much as I believe in you."

Episode is named after a song by Big & Rich. The opening theme is performed by Wakey!Wakey!

Retrieved from "https://onetreehill.fandom.com/wiki/Between_Raising_Hell_And_Amazing_Grace?oldid=65342"
Community content is available under CC-BY-SA unless otherwise noted.