Bevin Evan Mirskey (formerly Smith) was an employee of Macy's and a former student of Tree Hill High School. As a cheerleader in high school, Bevin formed close friendships with Brooke, Peyton, Haley and Rachel and also entered a relationship with Skills, although this ended after graduation. She was often perceived as being dumb by her classmates but later told Rachel that she let the other girls believe she was stupid because that's how they needed it to be. After graduation, Bevin married Tim Smith and had one child, Nathan Smith, but are now divorced.

Bevin Mirskey, a student at Tree Hill High School, lived with her mother and father and siblings Tommy, Tara and another sibling in the small town of Tree Hill. She was part of the Ravens cheerleading squad and was close friends with captain Brooke Davis. ("Spirit in the Night")

She was invited to Nathan and Haley's wedding reception, where she was seen dirty dancing with a male friend. She was also in the select few people to get invited to Haley's bachelorette party that takes place after their wedding. When Brooke ran for Student Body President, she was manipulated by Erica Marsh to believe that if Brooke won she would have no time for the cheerleading squad. This initially worried Bevin as she believed Brooke to be the best captain ever. ("Truth Doesn't Make a Noise") ("Near Wild Heaven") ("Quiet Things That No One Ever Knows")

Once Rachel Gatina moved to Tree Hill, the two quickly became friends. Rachel who was trying to take over the cheerleading squad used Bevin to make Brooke mad. After Bevin stole another squad member’s boyfriend a fantasy boy draft was conducted to ensure that nobody shared the same men. She was tricked by Rachel to give up her third pick spot for Rachel's fifth spot, as she was told that five was more than three. This however was a ploy for Rachel to gain Lucas Scott as her boy draft since Rachel now had the third choice. After daydreaming about being with Skills, Bevin chooses him to be her draft. ("A Multitude of Casualties") ("Locked Hearts and Hand Grenades") The two then embark on the mandatory date at her house where she plays him the movie The Notebook, to show him the depth of love. Following the school shooting incident, Rachel invited her, along with Lucas, Nathan, Peyton, Haley, Brooke, Mouth and Skills to her cabin at the woods. Bevin takes Skills on a walk through the forest and the two become lost due to Skills' skepticism. She however, insisted that she knew where the two were as she had been a girl scout. After spending most of a day thinking that they were stranded, they found themselves to be within shouting distance with the cabin. Later in the season, she attends Haley and Nathan's vow renewal. ("Champagne for My Real Friends, Real Pain for My Sham Friends") ("When It Isn't Like It Should Be") ("The Show Must Go On")

After Lucas and Brooke's break-up, Skills asks her to gain information for Lucas. However she returns to tell them simply that Brooke had broken up with him, information that Lucas clearly knew. At the state championship she goes to the hospital with the squad after Haley fear something is wrong with her and Nathan's unborn child. At a stripping contest, she has to comfort Skills when he gets stage fright, promising to then dance for him later. ("Good News for People Who Love Bad News") ("Some You Give Away") ("Resolve") In a class assignment to find out more about their class mates, she gets paired with Rachel. After a comment about her being dumb, Bevin replied with how she may seem dumb but she's not stupid and she only acts that way because Rachel and the other cheerleaders need her to feel better about themselves. She attends prom with Skills, and is also the person to announce that Brooke is prom queen. ("Pictures of You") ("You Call It Madness, But I Call It Love") Before graduation she is nervous when her parents want to meet Skills' parents. The two had both not told their parents about each other’s race, and worried that they wouldn't understand. Once Bevin returns home Skill's and his parents are already there and the families have been getting on great. At graduation, Bevin slips over on stage after being excited she has received her diploma. She then attends a party thrown by Rachel, and signs her name on the River Court with the rest of the group. ("The Birth and Death of Day") ("All of a Sudden I Miss Everyone")

It is announced by Skills that he and Bevin broke up and Skills resented Bevin for it. She also lost contact with her high school friends and began working at Macys. She later went on to marry high school friend Tim Smith. Somewhere between the four years Bevin gave birth to her and Tim's son Nathan Smith.

She is reunited with Lucas and Brooke when the two along with their partners visit Macy's. Bevin who works there reveals that she is married to Tim Smith and has a son named Nathan. Still ditzy she mistook Lucas and Brooke for a married couple and stated she thought he'd marry Peyton much to Lindsey's dismay. ("You're Gonna Need Someone on Your Side")

Bevin returned for the series finale and greets Clay, Quinn and Logan at the courthouse. Later, she was a witness as Clay and Quinn are married, and joins Logan to happily fete the new couple. She was shown to still be living in Tree Hill after the five-year time jump, as she appeared at the Ravens' basketball game.

Bevin lived with her parents during her school life and had a good relationship with them and even introduced her boyfriend Skills to them and feared their disapproval - they didn't and were happy with her choice. But after graduating Tree Hill High she married Tim Smith and together they had a son Nathan Smith. Bevin has also many siblings, at least 3: a sister Tara, a brother Tommy and an unknown sibling. By this sibling Bevin has two niece Jodi and Kate.

During her time as a cheerleader Bevin often would 'steal' other girls boyfriends. This lead to the fantasy boy draft where Bevin choose Antwon 'Skills' Taylor as her pick and they embarked on a first date were she 'Notebooked' him. But Bevin and Skills soon begin a serious relationship and they would often go out together such as to when they went together to Rachel's cabin and went hiking together. They continued their relationship until the end of their senior year. She later married Tim Smith another Tree Hill classmate and together they had one son; Nathan Smith. In season 9, they split up and went back together will Skills.

During her high school years Bevin was a cheerleader for the Tree Hill Ravens. Although Bevin was often seen as being the typical dumb blonde she graduated along with her fellow classmates. After graduating she moved on to work at Macy's as a store clerk. 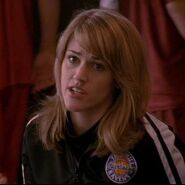 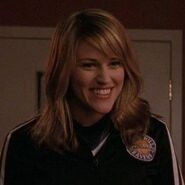 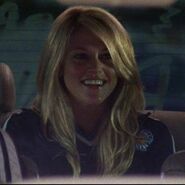 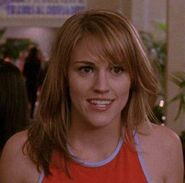 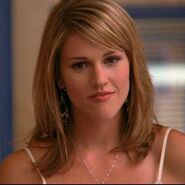 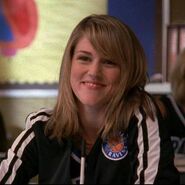 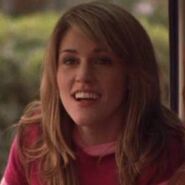 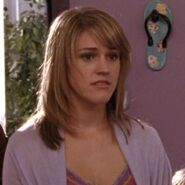 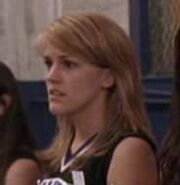 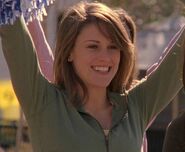 Retrieved from "https://onetreehill.fandom.com/wiki/Bevin_Mirskey?oldid=64581"
Community content is available under CC-BY-SA unless otherwise noted.