Start a Wiki
watch 01:52
The Loop (TV)
Do you like this video?
Darkness on the Edge of Town 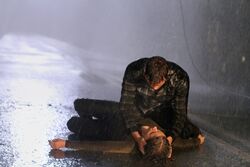 "Darkness on the Edge of Town" is the eleventh episode and mid-season finale of the eighth season of One Tree Hill and the 163th produced of the series. It was broadcast on December 7, 2010. A storm strikes Tree Hill, putting everyone's life in danger.

A massive storm effects the roads and Lauren has a car accident with Jamie, Chuck and Madison in the car, Brooke finds them and tries to save them, Lauren, Chuck and Madison are free and drive Brookes car to the hospital whilst Brooke tries to free Jamie, whilst helping Jamie try to escape a speeding car crashes into them plunging them into the water below, Julian jumps in to free Jamie and Brooke. Brooke nearly dies but Julian manages to bring her back to consiouness. Katie returns to murder Quinn, but Quinn conquers her.

A storm hits Tree Hill. Miss Lauren is hosting a spelling bee competition and its a tie up between Jamie and Madison but Jamie likes Madison and spells his word wrong to let Madison win.

After the competition Jamie asks can he ride home with Miss Lauren, Chuck and Madison and they agree, Julian and Brooke fight about wanting to move back to LA now that Brooke's company has closed down and Brooke storms out of the house and goes for a drive despite the storm. Julian phones Brooke as shes driving down the Gable Bridge he asks her where she is and he will come get her but whilst telling him where she is she screams and slams her breaks down after finding Chuck, Jamie's friend standing on the road in the rain bleeding. Brooke stops her car and runs over to him and he tells her that their has being a car accident further up with Lauren, Madison and Jamie in the car. Brooke runs up and gets Madison out of the car and tells her to go back to her car. She then manages to get Lauren free of the car and she drives Brooke's car with Chuck and Madison to the hospital, leaving Brooke behind to continue to try and free Jamie who is stuck in the turned car. Julian gets to the Bridge as Brooke is trying to free Jamie. Julian yells to an oncoming Car to stop, The car doesn't stop and Brooke and Jamie are pushed over the bridge into the water below in the car. Julian screams Brooke's name as he jumps off the Bridge into the water to save Brooke and Jamie. He gets into the car and Brooke's leg is now pinned down under the steering wheel and is unable to move as the car fills with water. Jamie is still stuck in the back.

Julian tries to free Brooke and fails, Brooke then tells Julian to get Jamie out first and then come back for her because "He is just a boy." Julian gets Jamie free and takes him back up to the bridge. When he returns, the car is almost completely under water. Julian tries to free Brooke again but can't find the crow bar to do it with. Julian searches the now water filled car and Brooke becomes completely submerged in the car. As her face goes underwater, he tells Julian she loves him, but he is unable to hear her.

When Julian finally finds the crow bar and goes back to the to Brooke to get her free, but she loses consciousness. He frees her and takes her back up to the Bridge and begins CPR. Nathan and Haley come across the bridge and see whats happening. Jamie runs over to Haley and Nathan while Julian continues CPR. Jamie hugs Haley and points at Brooke and says to his parents "Aunt Brooke's dead." Haley tells Jamie to go sit in the car and she and Nathan go over to Brooke.

Julian tries CPR for a few minutes and is unable to revive Brooke. Haley breaks down in tears looking at her lifeless friend and turns and buries her head in Nathans shoulder. Julian lays over Brooke and feels her hand move slightly and then he continues CPR, one last time. Then Brooke awakes spitting out water from her mouth and is later taken to hospital to be checked over.

Meanwhile over at Quinn and Clay's house, Katie returns to finish killing Quinn, Quinn stabs Katie with a knife and Katie pointing a gun at Quinn says 'This didn't work the first time, so knives it is!' and throws away the bullets outside and gun on the bed. Quinn manages to break free but whilst running off Katie shouts 'You go run, but I'm your storm, when you sleep I will be there", Quinn turns around and runs at her plunging the pair of them off the balcony and into the swimming pool below where the bullets were, after a struggle in the water and pool cover Katie gets out and Quinn lying very still pretends to be dead. Katie gets out of the water and heads inside where she is making a drink and listening to music, Quinn gets a bullet and gets out of the netting to go get the gun and get Katie back. Katie see's Quinn and Quinn runs to the bedroom to retrieve the gun as Quinn is holding the gun Katie laughs as the bullets don't fire and calls Quinn a bitch just as shes saying it the gun fires and Katie collapses to the floor bleeding. Quinn says you can't breathe but unlike you I won't leave you there for 12 hours- only a psycho would do that, after a bit of time alone crying Quinn calls the police and paramedics and Katie is taken away but not before Quinn tells her now I'm your storm.

Nathan: (serious) Well, second place. Also known as the first loser. You should be ashamed of yourself, you know that? As a matter of fact, why don't you walk home in the rain and think about how badly you screwed up.
Jamie: Grandpa Dan?
Nathan: (smiles) Nice call. You killed it out there, buddy. I'm so proud of you.
Jamie: Thank you.

-Nathan and Jamie
Haley:"Can I help you?" Nathan:"YEah, you can help me by getting back in the car you pregnant goof." -Haley James Scott and Nathan Scott
Jamie: "I knew how to spell entrepreneur. I said "ue" instead of "eu". But I knew it was "eu"." Brooke:"Did you get nervous?" Jamie:"No, I missed it on purpose." Brooke:" Why?" Jamie:" Because I wanted Madison to win the spelling bee." Brooke:"Why?...I like Madison. I think she's pretty cool." Jamie:"Yeah" Brooke:"You know, she asked about you. She asked me if you were okay." Jamie:" What'd she say?" Brooke:" It's not what she said, exactly. It's more how she said it. Trust me. Girls know these things... So what's the first thing you're gonna do when you get out of here?" Jamie:"Tell my mom and dad I love them. What are you gonna do?" Brooke:"Tell Julian I love him. And I love you, buddy." -Jamie Scott andBrooke Davis
Brooke:"Julian" Julian:"I can do it." Brooke:"Help him." Julian:"I can do it." Brooke:"Julian, he's just a boy."
Julian:"I can get you out, Brooke!" Brooke:"Julian, save him, and the save me. Please?He's just a boy.And he loves you, and so do I." Julian:"I won't leave you here." Brooke:"I know. Now go." -Brooke Davis telling Julian Baker to save Jamie Scott first.

Radio: Well it's raining, it's windy and it's cold out there at this point I advise everyone to batten down the hatches and get inside because were fast aproaching one serious storm.

This episode is named after a song by Bruce Springsteen. Opening theme is once again performed by Gavin DeGraw.

Retrieved from "https://onetreehill.fandom.com/wiki/Darkness_On_The_Edge_Of_Town?oldid=60716"
Community content is available under CC-BY-SA unless otherwise noted.