Start a Wiki
watch 01:36
The Loop (TV)
Do you like this video?
Erin Macree 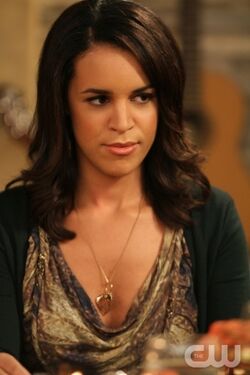 Erin Macree was an Irish singer who was signed to Red Bedroom Records.

Not much was known about Erin's early life, but she told Jamie that her parents disapproved of her singing career. She hadn't talked to them since she left Ireland.

Erin was first introduced as a caller to the Crisis Center. Haley answered her call, pleased to help her. Erin was later seen at the Halloween party, performing one of her songs. Haley recognized her voice, and when Erin called back to the center, Haley told her she did a great job and how she wanted to sign her. Erin, confused, hangs up the phone, it left Haley feeling guilty. She later confronted Haley, doubtful about her. Mia reassured Erin that Haley was honest, sincere, and will help her career soar. She later trusted Haley and began recording.

Erin went to a Thanksgiving party, hosted by Haley. She told Jamie that she didn't talk to her parents, because they didn't support her dreams. She later opened for Kid Cudi, her first major performance. Mia and Alex got people to come to her performance by bartending. Everyone loved her performance, boosting her confidence.

After a while she departed Tree Hill, but later called Haley and informed her she got better and talked to her parents.

Retrieved from "https://onetreehill.fandom.com/wiki/Erin_Macree?oldid=64630"
Community content is available under CC-BY-SA unless otherwise noted.