This article refers to the character from "We Three (My Echo, My Shadow and Me)". For the article about Haley James Scott see here 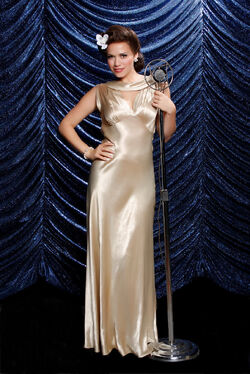 Haley James was a successful singer travelling the country in the circus singing but after a while she started to want to settle down and when she arrived in Tree Hill City she "fell in love with the rain" and she decided to move there. She then started to work at Dan Scott's The Comet Club where he forced her to wear slutty clothes and lots of make-up which she hated as she was constantly lured at by the men in the club and she was then "rescued" from the club by Lucas Scott, although Dan still felt he owned Haley and would often threaten her and once even sexually attacked her.

Haley was a singer a Karen's Cafe where Nathan Scott worked who had been in love with her since the first day he met her. After a drunk man at the bar flirted with Haley, Nathan stepped in to stop him attacking her. He then asked her to if she would "step out with him" which she agreed to. But Nathan had just got a letter for him to deploy with his unit. They went out at Karen's Cafe, danced and kissed when Nathan told her he was leaving tomorrow and that he would only want to

spend his last night with her. The next day they went on a picnic where Nathan gave her a crack-a-jack bracelet and told her he loved her, and that he was afraid of dying and her not knowing how he felt. Then Haley asked him if he trusted her and he said he did. They then got married and spent their first night together where they talked about their future, their future children and house. Then Nathan was sent away where Haley saw him and they promised they would be together for "always and forever". Haley also used to be a singer at the Comet Club and told Nathan that when she was going around the country singing she decided to settle down somewhere and chose Tree Hill City because of the sound of the rain, but she soon got trapped in the Comet Club until Lucas Scott offered her a job at Karen's Cafe.

Like Haley James Scott, Haley was a successful singer living in Tree Hill. The two both also married Nathan Scott after a short period of dating and they both talked about having a son named James "Jamie" Scott.

Retrieved from "https://onetreehill.fandom.com/wiki/Haley_Scott_(1940s)?oldid=64145"
Community content is available under CC-BY-SA unless otherwise noted.