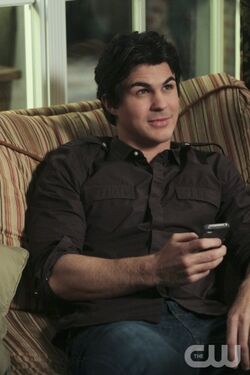 He was first introduced by Clay as a potential client for Fortitude.

Following the car crash that nearly took Brooke and Jamie's lives, the driver of the vehicle who crashed into the car remained a mystery. This was until Nathan and Clay traveled to see Ian to sign a contract with him, only having lost a game of beer pong against the two potential agents.

Upon visiting the toilet, Nathan spoted the dented 4x4 in Ian's garage, with a finished bottle of alcohol inside. Nathan believed at first that it was Ian's father, August. Nathan accused August of this issue and later August admited that he was the one driving. Later, Nathan, Ian, and Clay were at the bar when Ian asked Chase to pour four shots of the same kind of alcohol that was inside the car that crashed into Brooke and Jamie. Nathan then realized he made a mistake when accusing August.

Nathan, Clay and Julian drive Ian to the bridge where he hit Brooke and Jamie. Ian, although he apologized, showed no remorse for his actions as he would rather focus on his baseball career and viewed nobody dying as him and the agency dodged a bullet. This prompted an angry Clay to tackle Ian over the bridge, sending them into the water below. Julian jumped in behind them, dunking Ian's head into the water to show him how Brooke and Jamie felt that night. Nathan lastly pulled him out of the water and punched him.

Throughout his appearances in the show in Season 8, Ian was always with a girl. It wasn't until the 17th episode, The Smoker You Drink, The Player You Get, we see Alex Dupré texting a mysterious boy. It was only at the end of the episode when Ian texted an 'A.D' that we realize that her mystery man was Ian Kellerman. Unfortunately for him, Alex blew him off in order to spend time with Chase.
Retrieved from "https://onetreehill.fandom.com/wiki/Ian_Kellerman?oldid=65796"
Community content is available under CC-BY-SA unless otherwise noted.