This article refers to the character from "We Three (My Echo, My Shadow and Me)". For the article about Lucas Scott see here 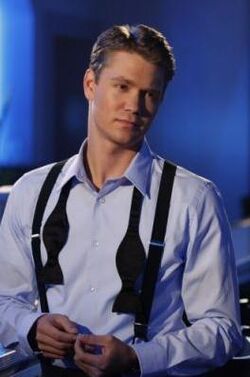 Lucas Scott was the owner of Karen's Cafe, which he inherited from his mother, Karen, after she left Tree Hill City when Keith Scott was murdered. Despite having a fierce rivalry with Dan Scott, owner of the Comet Club, whom he believed was responsible for all the pain and suffering in Tree Hill City, Lucas formed a relationship with Peyton Sawyer, Dan's surrogate daughter. Lucas and Peyton's romance, however, would end in tragedy when a confrontation with Dan ended with Peyton being fatally shot.

Lucas was the son Keith Scott and Karen Roe, the creator of Karen's Cafe. After the death Keith Scott, Lucas' mother, Karen Roe, left Tree Hill City and gave the ownership of Karen's Cafe, a popular club in Tree Hill City, to her son Lucas. Lucas became the owner and the manager of the club. The club became very popular once Lucas became owner attracting many people, including fashion designer Brooke Davis. He became very good friends with the piano player at Karen's Cafe, Antwon Taylor.

One night, Dan Scott, owner of the rival Comet Club, along with his group of thugs and his surrogate daughter Peyton Sawyer, entered Karen's Cafe causing a ruckus. Lucas met up with Dan and personally asked him to leave, but before they left Julian Baker broke a bottle and attempted to attack Lucas with it. However, Officer Owen Morello broke up the fight before it got physical. That same night, when Lucas was about to go home, he found Peyton Sawyer with her car broken down and decide to try and fix it. He eventually decided to instead walk her home when he was unable fix her car. When he walked her home, Lucas asked Peyton why she was associated with Dan, and she revealed to him that her mother, Anna Sawyer, and Dan were once in love and once her mother tragically died, Dan took her in as her own. Once they reached Peyton's house, they kissed and then the two parted ways. The following night, Peyton returned to Karen's Cafe and gave Lucas a dove pendant and, though Lucas asked her to stay, she then left. Soon after, Peyton rushed back to the club to inform Lucas that Dan Scott and his group of thugs were going to kill the reporter Marvin McFadden and that, Dan had killed Keith Scott. Lucas then grabbed a case from underneath the bar table. He opened up the case and pulled out a loaded pistol. He told Peyton and Antwon to stay inside the club, but Peyton followed him. Before he could reach his automobile, another automobile pulled up in front of Lucas and Peyton. Julian Baker exited the automobile and attempted to shoot Lucas but was instead shot dead by Lucas. Then from behind, came Dan Scott and Brooke Davis. Dan gave Brooke a revolver and told her to shoot Lucas but Brooke turned the gun on Dan only to realize the gun was empty. Dan then knocked Brooke down and then pulled out another gun. After a short conversation with Lucas, Dan attempted to shoot Lucas, but was tackled by an injured Antwon Taylor. Lucas and Dan both fired off a shot before Dan was tackled. Lucas missed, however, Dan's shot struck Peyton Sawyer. Lucas quickly came to aid Peyton. Mortally wounded, Peyton told Lucas that he helped her become free from Dan. Lucas cradled her body as she perished.

This version of Lucas Scott mirrors his counterpart in many ways but most notably in that he serves as the main protagonist for the story, mirroring the way in which the narrative of the series followed his counterpart from his introduction in Pilot to his departure in Remember Me As A Time Of Day. Another marked similarity between the two character is the prevalence of the relationship between Lucas and Peyton Sawyer which serves as the main focus point of the episode and of the first six seasons' of the series. There are noted similarities between the relationships between both versions of Lucas and Peyton such as meeting over a broken down car.

Retrieved from "https://onetreehill.fandom.com/wiki/Lucas_Scott_(1940s)?oldid=64132"
Community content is available under CC-BY-SA unless otherwise noted.