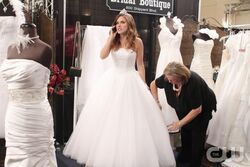 "Luck Be a Lady" is the seventh episode of the eighth season of One Tree Hill and the 159th produced episode of the series. It was broadcast on November 2, 2010. As the wedding approaches, Brooke tries to connect with Sylvia, while Julian looks for his best man at a guys' poker night. Meanwhile, Nathan struggles in his new job, while Haley's counseling abilities are challenged, and Skills returns to town with a new friend.

" Hey, I got an interesting phone call this morning.
"Yeah. Sorry about that. Jamie's been calling everybody about this frog he found."
"No, I.. Jamie found a frog? That's awesome."

Listen to me... unless you want your baby to be born with a dent in its head the size of my fist, you had better start agreeing with me."
"Hear that, baby? That's auntie Brooke's way of saying she can't wait to meet you. Hmm!"
"Oh, wouldn't this champagne fountain look beautiful at your reception?"
"It's... not really my taste."
"Well, what kind of wedding doesn't have a champagne fountain?"
"Mine."
"Mine, either. I wish it did, though. I do. Brooke, it's so cool. Come on. This is like a fountain of happiness."
"Ahh. That's what I thought, too"
"You know, just excuse us for one second. I want to show Haley something."
"What did you want to show me?"
"The exit."
"Why?"
"I love you, but your hormones are not helping me right now."
"Fine. But go easy on her, okay? She's so excited for you!"
"You're doing it again! Go."

This episode is named after a song by Frank Sinatra. Opening theme song performed by Lucas Field.

Retrieved from "https://onetreehill.fandom.com/wiki/Luck_Be_A_Lady?oldid=65340"
Community content is available under CC-BY-SA unless otherwise noted.