This article refers to the character from "We Three (My Echo, My Shadow and Me)". For the article about Nathan Scott see here 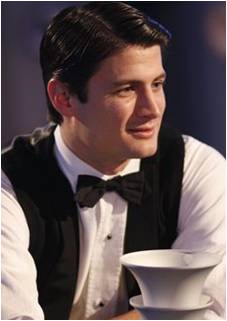 Nathan Scott was the bartender of Karen's Cafe and the husband of Haley James who enjoyed a quick, yet wondrous, relationship with his wife who married quickly before he was deployed to fight in the war.

Haley was a singer a Karen's Cafe where Nathan Scott worked who had been in love with her since the first day he saw her. After a drunk man at the bar flirted with Haley, Nathan stepped in to stop him from attacking her. He then asked her to if she would "step out with him" which she agreed to. But Nathan had just got a letter for him to deploy with his unit. So they went out at Karen's Cafe, danced and kissed when Nathan told her he was leaving tomorrow and that he would only want to spend his last night with her. The next day they went on a picnic where Nathan gave her a crack-a-jack bracelet and told her he loved her, and that he was afraid of dying and her not knowing how he felt. Haley asked him if he trusted her and he

said he did. They then got married and spent their first night together where they talked about their future, their future children and house. Nathan was sent away where Haley saw him and they promised they would be together for "always and forever". During the war, Nathan would change his name to Scott Summers, combining his surname and Haley's favorite season.

Like the real life Nathan Scott, Nathan lived in Tree Hill where he shared a close relationship with Lucas Scott and this led to him meeting and falling in love with Haley James. After a short period of dating they married without most of their friends and family and without an engagement or announcement to close ones of the intended marriage. Once married for both couples children were discuss/had quickly with both of them talked about having a son named James "Jamie" Scott. Also, for both couples, the pair was forced to separate for a long period of time due to one of their careers.

Retrieved from "https://onetreehill.fandom.com/wiki/Nathan_Scott_(1940s)?oldid=64674"
Community content is available under CC-BY-SA unless otherwise noted.