Start a Wiki
watch 01:11
The Loop (TV)
Do you like this video?
Nick Lachey 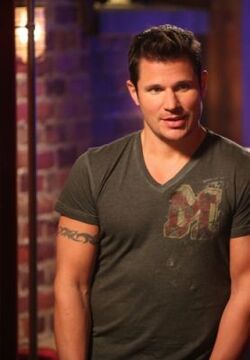 Nick grew up with his family including his brother Drew in America. Alongside his brother and other band members, Nick created the band 98 degrees who had much success with their records. After the split of the band, Nick pursued a career as a solo artist.

Living in the spotlight, Nick was constantly spotted with new women who were seen as attractive and more than likely as famous as Nick. During his time in Hollywood, Nick dated internationally famous fashion designer, Brooke Davis. Nick was blown away when he was in a relationship with Brooke, but eventually the relationship ended.

After looking to record a new song, Nick came across a returning artist, Haley James Scott. After a supposed mix up with the record label, one of Haley's songs, called 'All in My Head,' became available for artists to record and Nick jumped at the opportunity. However, Haley was not so keen with the mistake and refused the label to let Nick record the song, but this did not stop Nick. Determined to get his way, Nick flew to Tree Hill and interrupted a recording session with Mia Catalano and Haley, who were both amazed to see him. After their introduction, Haley explans the mix up with the label, but Nick says he is glad and offers to do anything for the song, but Haley still refuses. Later, he is involved in a misunderstanding with Mia who is angry at her boyfriend Chase. She storms over to the bar where Chase is working and Nick is drinking and asks if he lost his virginity to Brooke. Nick is offended and asks if Brooke is saying that as he did not, but is soon embarrased when he realizes Mia is talking to her boyfriend. But Nick still compliments Chase for losing his virginity to a girl like Brooke. After a day in Tree Hill, he returns to see Haley in the studio to make one last bid to get the record but is surprised when Haley turns around telling him that she has worked the instrumental of the record and he is able to record it, on one condition, that she can produce the record. ("A Kiss to Build a Dream On")

The following days sees Nick working hard to record his new single alongside Haley. Eventually, Haley leads for her dear friends' wedding, Peyton Sawyer and Lucas Scott. During that day, Brooke Davis is upstaged when her ex, Julian Baker brings a date, Missy, to their wedding. Furious, Brooke comes up with a plan that drags Nick into the middle of her embarrasment. She races to Red Bedroom Records Studio where Nick is recording and gives him a suit. Nick is then dragged out to the wedding reception at Tric nightclub where he is introduced to Lucas, Julian and Missy, who is particularly enfactuated with his brother, Drew who she knows from 'Dancing With The Stars' and thinks Nick has a very similar look to his brother. Julian is suddenly very jealous and begins to insult and tease Nick, but Nick has enough and hits him in the face. Julian then admits that he is jealous of Nick and believes he cannot upstage someone from one of his favourite bands.("Forever and Almost Always")

After the day he spent being shown off by Brooke, Nick tells her that he has decided to leave. He explains that he knows why she picked him as a date, to show off to Julian. When asked how he knew, Nick reminds her that when they were dancing and they kissed, Nick realized it was not a proper kiss from Brooke as he knows how a real 'Brooke Davis' kiss feels. He leaves telling Brooke that Julian is still clearly in love with him. However, Nick does not leave immediatley. He spends the night on the pool table in Red Bedroom Records Studio with Missy. They sleep together as he pretends she is Brooke and Missy pretends he is Drew. ("Forever and Almost Always")

Nick is known to have one brother called Drew who he was very close to and entered into the spotlight with him. Drew is often seen as more attractive than Nick, and this was believed by Missy who saw Nick at Lucas' wedding. Drew has also starred in the show 'Danicng With the Stars' as well as released a string of records alongside Nick in band, 98 Degrees.

Nick is known to have had one relationship in Hollywood with famous fashion designer and resident of Tree Hill, Brooke Davis. During the apparent short time they spent together, Nick was very much in love with Brooke and knew a lot about her including the way she gives truthful kisses that were so good he labelled them 'Brooke Davis kisses.' However, the relationship ended throughout the time Brooke spent in Hollywood.

Retrieved from "https://onetreehill.fandom.com/wiki/Nick_Lachey?oldid=44750"
Community content is available under CC-BY-SA unless otherwise noted.