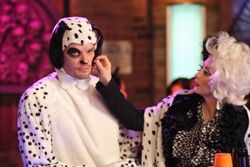 "Not Afraid" is the sixth episode of the eighth season of One Tree Hill and the 158th produced episode of the series. It was broadcast on October 19, 2010. As Halloween approaches in Tree Hill, Brooke and Julian get an unexpected visitor, and Nathan begins a new career. Meanwhile, Clay and Quinn struggle with life back at the beach house, and Haley and Mia host an open mic night at Tric.

Quinn walks out to find Katie and Clay on the couch together, confused as to why Clay is sitting with the person who tried to murder them. Much to her shock, Katie and Clay turn into zombies and prepare to attack her on the count of two, before she runs out of the beach house. Quinn next finds Nathan, who is holding a bloody kidney and also becomes zombified as well, as she runs upstairs to find Haley. Haley has been bitten, leaving Jamie and Quinn as the only non-infected members of the family. Quinn and Jamie run into Clothes Over Bro's to find Julian and Brooke fighting off a horde of zombies. A zombified Jamie leaps onto Quinn preparing to bite her, as she wakes up in the middle of the night screaming, revealing it all to be a nightmare.

"How are you feeling today, beautiful?"
"Not very beautiful>"
"Oh, okay I'm gonna grab a mirror. Your reflection should take care of that."
"Stop. Not feeling very good about myself right now."
"You want to talk about it?"
"What's there to talk about its gone. Clothes over Bros, everything I worked so hard to build, its all gone."
"Not all of it."
"Julian, I signed everything away."
"Hey come here. Tell me something, why was Clothes over Bros so successful? Actually, I'll answer that. It's because of you. Every design, every detail, every idea came from somewhere inside of you. And that's still there you can't sign it away."
"Clothes over Bros, was me. Without it, I don't really know who I am anymore."
"Well, good news. Today is Halloween. Even though its a highly over rated creepy witch holiday, the one perk that it is you don't know who you are. You can be anyone you want today."

"You know how there are a handful of moments in you life, that you just know while it's happening, you're going to remember it for the rest of you life. I had one of those moments tonight. When I looked at Jamie."

"Now that basketball is over, I just keep asking myself this same question, over and over.. will I ever be great at anything again?"
"You'll find it. If there's one thing I'm not worried about with you is that you'll find something to be great at again."

This episode is named after a song by Eminem. Opening theme song performed by Laura Izibor.

Retrieved from "https://onetreehill.fandom.com/wiki/Not_Afraid?oldid=65339"
Community content is available under CC-BY-SA unless otherwise noted.