Start a Wiki
watch 01:52
The Loop (TV)
Do you like this video?
Paul Johansson 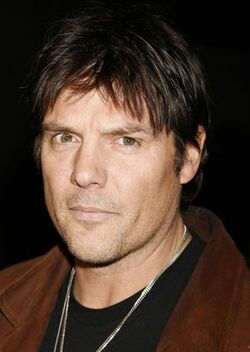 Born and raised in Spokane, Washington, Johansson was an avid athlete like his father, a former NHL player. After playing with the Canadian National basketball team and leading his university to the Canadian College Championship game, he began contemplating a professional career in basketball overseas. Changing gears, however, Paul chose to set his sights on Hollywood.

Making his television debut on the soap opera "Santa Barbara," he soon moved on to a succession of roles in such shows as "Parker Lewis Can't Lose","Beverly Hills, 90210","Lonesome Dove: The Series", "Highlander: The Raven", and "Ed McBain's 87th Precinct". Johansson also made memorable guest appearances in "Dharma and Greg" and "The Drew Carey Show" and had a recurring role in "The District."

On the big screen, Johansson appeared in the feature film "Alpha Dog",opposite Bruce Willis and Justin Timberlake. He also played Sally Field's soap opera husband in the film "Soapdish". His other movie credits include "When the Party's Over","The Big Picture","She's So Lovely","A Wilderness Station", and "Carnival of Souls".

As a filmmaker, Johansson was awarded two Emmys for the feature film "The Incredible Mrs. Ritchie", which he both wrote and directed. The film starred Gena Rowlands and James Caan and was produced by Nick Cassavetes. He also wrote and directed the acclaimed 19-minute film short "Conversations in Limbo", which opened the Toronto Short Film Festival. This film was honored at the Nashville Independent Film Festival and ultimately acquired by the Sundance Film Channel.

Work on One Tree Hill

As well as appearing as Dan Scott, Johansson has also directed the following episodes:

Retrieved from "https://onetreehill.fandom.com/wiki/Paul_Johansson?oldid=63757"
Community content is available under CC-BY-SA unless otherwise noted.