This article refers to the character from "We Three (My Echo, My Shadow and Me)". For the article about Peyton Sawyer see here 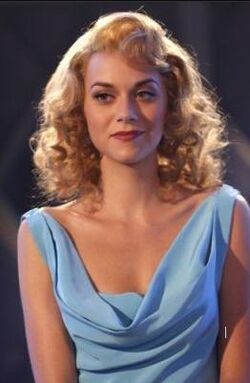 Peyton Sawyer was the surrogate daughter of Dan Scott who started caring for her after her mother's death. While aware of Dan's way of doing business, she tried to distance herself from it, and his control, and eventually fell in love with the owner of Karen's Cafe, Lucas Scott. She was, however, killed by Dan in a confrontation with Lucas.

Peyton came under the care of Dan Scott, owner of the Comet Club, when her mother, Anna Sawyer, whom Dan was in love with, died.

One night, Peyton, along with Dan and his group of thugs, entered Karen's Cafe, which was a rival of Dan Scott's Comet Club. While Peyton remained quiet, Dan and his thugs caused a commotion which almost resulted in a fight which was stopped by Tree Hill City police officer Owen Morello. They left the club thereafter; Peyton was driven back home and was then told by Dan not to interact with Lucas Scott who was the owner of Karen's Cafe. Disobeying Dan, Peyton returned to Karen's Cafe where she purposelessly sabotaged her automobile in an attempt to get Lucas' attention. Lucas attempted to fix her automobile, though his efforts were futile. Lucas then decided to walk Peyton home instead. During her walk home including, Lucas asked her why she was associated with Dan, Peyton then revealed that her mother, Anna Sawyer, and Dan were once in love and once her mother tragically died, Dan took her in as her own. Once they reached Peyton's house, the two kissed, and then parted ways. The following night, Peyton returned to Karen's Cafe and gave Lucas a dove pendant and, even though Lucas asked her to stay, she then left. Afterwards, Peyton went to a bridge where she found Dan and his thugs torturing the reporter Marvin McFadden. She then ran up to Dan told him to stop torturing Marvin. Marvin shouted that it was Dan who killed Keith Scott, Peyton asked if it was true, Dan then hit her across the face then told her to wait in his automobile. Peyton left in his automobile and rushed back to the Karen's Cafe to inform Lucas that Dan Scott and his group of thugs were going to kill the reporter Marvin McFadden and that, Dan had killed Keith Scott. Lucas then grabbed a case which contained a pistol. Lucas left the club. Peyton then followed Lucas outside of the club. Soon after they exited the club, Julian Baker pulled up right in front of Peyton and Lucas, got out his automobile and attempted to shoot Lucas. Lucas, however, shot Julian dead before he had a chance. Dan Scott and Brooke Davis then showed up from behind. Dan gave Brooke a revolver and told her to shoot Lucas but Brooke turned the gun on Dan only to realize the gun was empty. Dan then knocked Brooke down and then pulled out another gun. After a short conversation with Lucas, Dan attempted to shoot Lucas, but was tackled down by an injured Antwon Taylor. Lucas and Dan had both fired off a shots seconds before Antwon tackled Dan. Lucas missed, however, Dan's shot struck Peyton Sawyer. After realizing that Peyton was shot, Lucas quickly came to her side. Mortally wounded, Peyton told Lucas that he helped her become free from Dan. Lucas cradled her body as she perished.

Retrieved from "https://onetreehill.fandom.com/wiki/Peyton_Sawyer_(1940s)?oldid=64138"
Community content is available under CC-BY-SA unless otherwise noted.