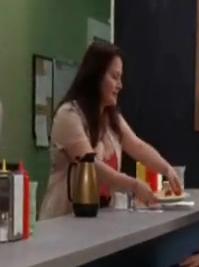 Rebecca Dennis was Sam Walker's biological mother who gave her up for adoption. Although she instead went into the foster care where she was eventually fostered by Brooke Davis and while she was living with Brooke, Rebecca got back in contact with her daughter and Sam eventually moved in with her mother.

During her time in high school Rebecca fell pregnant. She decided to keep her child but her parents convinced her to put the baby up for adoption. Rebecca gave birth to a daughter named Samantha.

Rebecca took the decision to see her daughter who was now the fashion designer Brooke Davis' foster daughter. She wrote a letter to Sam, but the letter was found by Brooke's mother. To protect Brooke and Sam; Victoria tried to destroy the letter but she was interrupted by Brooke. Brooke asked to see the paper and later gave it to Sam. First Sam refused to read the letter but Brooke persuaded. Then Rebecca meets Sam for the first time. They both spend time together and were watched by both Brooke and Victoria. Victoria wanted to make a folder against Rebecca, but Brooke didn't even know if she wanted to legally adopt Sam. When Brooke spoke with Sam about the possible adoption, Sam accepted but was worried about not seeing her birth mother again, Brooke reassured her, saying that she could still see Rebecca. But later Sam told to Brooke that she wanted to live with Rebecca. Sam and Brooke have a heart to heart and Sam told Brooke that she will always be her first mom.

Rebecca was Samantha Walker's birth mother, she gave her daughter up for adoption shortly after her birth but almost 16 years later she decided she wanted contact with Sam. Both girls spend time together and got close. Later Sam moved in with Rebecca. Despite being her biological mother, Sam classed her as her second mom and her first being Brooke Davis.

In her Teens years she dated with an unknown boy whose she had a baby girl.

Rebecca was a waitress in a café. According to Victoria she had a little salary.

Retrieved from "https://onetreehill.fandom.com/wiki/Rebecca_Dennis?oldid=63816"
Community content is available under CC-BY-SA unless otherwise noted.