Start a Wiki
watch 01:52
The Loop (TV)
Do you like this video?
Season Five 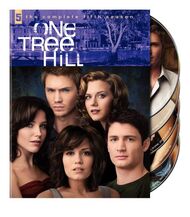 Season No.
5
Premiere Air Date
January 8, 2008
Premiere Episode
4 Years, 6 Months, 2 Days
Finale Air Date
May 19, 2008
Finale Episode
What Comes After the Blues?
No. Of Episodes
18
Credited Cast
Chad Michael Murray
James Lafferty
Hilarie Burton
Bethany Joy Lenz
Sophia Bush
Paul Johansson
Lee Norris
Antwon Tanner
Jackson Brundage
Season Five of One Tree Hill aired its first episode on January 8, 2008 on the CW network and ended on May 19, 2008 with the season finale. This season consists of 18 episodes, the second shortest season to date, due to the impact the writers' strike had on production.

"Hello again! Four and a half years after the searing and surprising events that marked their final days at Tree Hill High, old friends return to their North Carolina hometown. Some of them reached the goals they set as teens: Lucas published his novel, Brooke rocked the fashion world as an acclaimed couturier and Haley became the teacher she always yearned to be. Some didn't: Peyton crashed and burned in L.A., and Nathan saw his promise of pro hoops glory evaporate in a single, violent moment. But once they're back home, everyone discovers much is still the same: love, friendship, challenges, triumphs, laughter, tears... and dreams. As Lucas says, it's just the beginning."

The season chronicles the first year of the group's lives after returning to Tree Hill. Some of the key plot points are:

Retrieved from "https://onetreehill.fandom.com/wiki/Season_5?oldid=66201"
Community content is available under CC-BY-SA unless otherwise noted.