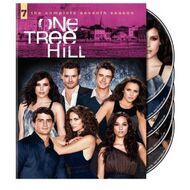 "Friends and lovers, fame and fate - everything happens in Tree Hill. Lucas and Peyton are gone, but One Tree Hill's tales of interwined lives and passions remain stronger than ever in this 22-Episode, 5-Disc Seventh Season. Nathan's NBA career is threatened by explosive scandal. Haley faces a family tragedy. Brooke thinks she's found true love with Julian - until a Hollywood hottie decides he's just her type. Dan leaves the slammer for the media spotlight and a sexy young wife (someone you know, OTH fans). Millie spirals into self-destruction, breaking Mouth's heart. And compelling new characters arrive: Haley's beautiful sister Quinn and Nathan's agent Clay, both with secrets from the past and dramatic new stories to tell"

The season chronicles the fourth year of the group's lives after returning to Tree Hill, with a fourteen month leap between the sixth and seventh seasons. Some of the key plot points are

-* Credited through to Weeks Go By Like Days, recurring afterwards

Retrieved from "https://onetreehill.fandom.com/wiki/Season_7?oldid=51821"
Community content is available under CC-BY-SA unless otherwise noted.