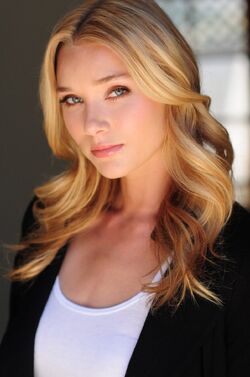 Taryn is introducted during girls' trip in Puerto Rucio for Brooke's former company. Taryn poses for Quinn James and met Brooke and Alex on the Beach. Later she is invited by Quinn at their soiree sushi, drink and dance. She accepts and spends the night with the girls. After the party she helps Quinn with Lauren who is drunk. The next morning Quinn invites her to visit the town and they spend time in poor district where Quinn photographs Taryn playing with children.

Taryn's beginning in the modelling world recently because she didn't know Brooke Davis Baker the former owner of Clothes Over Bros from where Brooke knew several models. But Quinn's photography of her was chosen to make the cover of B. Davis.

Retrieved from "https://onetreehill.fandom.com/wiki/Taryn?oldid=63770"
Community content is available under CC-BY-SA unless otherwise noted.