As Haley's music career starts to take off in Season 7, remember back to where it all began. A young budding musician is forced to chose between her own dreams and the man she loves. The second season episode : The Hero Dies in This One, saw Haley make the hardest choice of all but also witness Lucas seemingly betray Karen, while we see Brooke starting her campaign to be student body president and a special appearance by The Wreckers. (more)...

The character of Rachel may not have spent a great deal of time in Tree Hill, but she certainly made an impact. She's tried to have her way with most of Tree Hill's guys - Lucas, Nathan, Cooper and Mouth included, she inadvertently triggered some of Tree Hill's darkest days by opening the time capsule and has also developed a serious drug addiction. But now she's back and she of all people is married to Dan, but can her so-called reformation last? (more)... 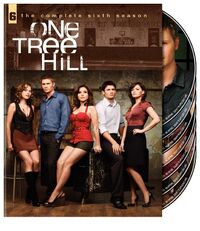 The sixth season saw every character trying to achieve their dreams - whether it was Lucas and Peyton trying to live happily ever after, Brooke attempting to fight her insecurities and Nathan and Haley continuing to find the balance between their dreams and their family. Spanning 24 episodes, the sixth season provided further explored the loves and lives of the Tree Hill gang as they continued to deal with the pressures of adulthood. (more)...

After high school ended the Tree Hill gang departed for college, but returned to their North Carolina hometown four years later - and 4 Years, 6 Months, 2 Days showed for the first time who the teens had become as they transended into adulthood. Considered by some to be a second pilot, the episode helped transition the show from it's teenaged-roots to a more sophisticated and complex series. (more)...

The Pilot episode is the first episode of One Tree Hill and was first broadcast on September 23, 2003. The episode introduced the important charaters, plot lines and backstories that have shaped the stories told over the six years but also featured vital moments which continue to play a key role in the series such as Lucas and Peyton's first meeting. (more)...
Retrieved from "https://onetreehill.fandom.com/wiki/Template:Featured_Article/Archive?oldid=65040"
Community content is available under CC-BY-SA unless otherwise noted.