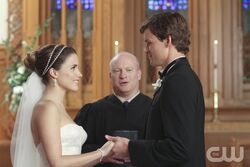 "The Other Half Of Me" is the thirteenth episode of the eighth season of One Tree Hill and the 165th episode produced of the series. It was broadcast on February 1, 2011. Brooke and Julian's wedding day is finally here. Dreams become reality, secrets are revealed and wedding hookups are inevitable.

"But sweetie, you know this isn't a competition right?"
"Okay good. Just remember that when they like my speech more."

"Why are you dancing like that Brooke?"
"Because this dance is what made an amazing man fall in love with me!"

"You know a few years back there was a wedding here in Tree Hill.. bride wasn't who she said she was. A lot f good people got hurt that day."

"Julian, before I met you my world revolved around one thing... me. And I liked it that way on my own, but then I met you and you saw through the façade. You saw me. You've taught me to trust, how to let someone in, and what it truly means to fall in love. I can't possibly describe how much I love you, so I'll tell you why I love you. You see the world in a way that no one else does and you appreciate everything, including me. There's no one in the world like you, and if you say "yes" in a few minutes, I'll get to spend the rest of my life trying to see the world through your eyes, appreciating everything, including you... the most unique, wonderful, and terribly handsome man I have ever met."

"Don't nobody say nothing!"

"J.K. Rowling once wrote: " the consequences of our actions are so complicated, so diverse that predicting the future is very difficult business indeed". J.K Rowling was right. But what most of you don't know is Julian was able to do it. He knew a long time a go that he would find Brooke. When Julian was my age, which was a very, very, very, very long time ago, he went to a county fair, and he met a girl... not Brooke. But they went on a bunch of rides together, including the Octopus. Irrelevant to the story. But that night, Julian felt a crush for the first time, a real crush. Relax, Aunt Brooke. He was my age. So at the end of the night, they decided to break this bumper-car token in half. Julian kept his other half all these years, not because he missed the girl, but because he knew somewhere out there was the other half, his perfect match. And he was right. Today Julian married my Aunt Brooke. She's probably the coolest girl I know and the girl Julian's been waiting for since he broke this bumper- car token in half a long time ago at the county fair. And today Julian gave me this token. He said he didn't need it anymore because he found his other half. Congratulations, Julian. I thin it was worth the wait."

"Well, when I first met Brooke Davis, she had no idea who I was. Of course everyone knew who she was, she was the most popular girl in school. She was head cheerleader, annoyingly pretty (still is), and I used to wonder back then 'What would it be like to be friends with Brooke? Would she make me popular? Would all the boys start asking me out?' And then one night I got to hang out with Brooke, all night. Oh, and she didn't like my name, though, so she decided she was going to give me a name that, uh, she did like, which ended up being Brooke. And from that moment I knew that I wanted Brooke to be my friend. Not because she was going to make me popular, and not because boys would start asking me out, but because I got a glimpse of the real Brooke. A girl with the biggest heart that I have ever known. And you know, when you're in high school, it's not very easy to let people see who you really are. I could see it though, it was in the eyes. So we became friends, and now she's my best friend. We've been through so much together over the years, and our friendship is still growing. So I know that your friendship and love for Julian will continue to grow every year for the rest of your lives and I feel so lucky to be a part of that. I love you, Brooke Davis."

"Hey, sleepy. You did great tonight."
"You think it was okay?"
"Okay? I have heard a lot of best man speeches in my life and yours was by far the sweetest, most hones, and most memorable. I have never been so proud of you. And you know what? Your little sister would be proud, too."
"I'm going to have a little sister?"
"Is that okay?"
"Yeah. I hope she's just like you, mom."

This episode is named after a song by Within Temptation. Opening theme song performed by Augustana.

Retrieved from "https://onetreehill.fandom.com/wiki/The_Other_Half_Of_Me?oldid=65932"
Community content is available under CC-BY-SA unless otherwise noted.