Start a Wiki
watch 01:36
The Loop (TV)
Do you like this video?
The Smoker You Drink, The Player You Get 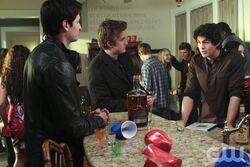 "The Smoker You Drink, The Player You Get" is the seventeenth episode of the eighth season of One Tree Hill and the 169th produced in the series. It was broadcast on March 1, 2011. As Haley's due date approaches, she takes steps to ensure that all her friends and family will be ready when the time comes. Brooke and Julian also prepare to begin a family, while Chuck turns to Chase for help with a problem.

The episode starts with Quinn singing a song and eating toaster strudel. She is happily singing to herself. Haley comes in and she tells her that her water has broken and she needs to go the hospital immediately. Quinn panicks but tries to remain calm. She picks up her slice of toast and a magazine and searches for her keys. She finds Clay's keys and searches for her own. Haley reminds her that she is driving Clay's car that day. Haley looks on amused that she is getting so flustered. Quinn takes Haley to Clay's car and Haley reminds her that she cannot fit in the car as it is a small sports car. Quinn puts her in the boot. Haley then tells her that she is actually not having her baby. Quinn is not amused and says that it was a dirty trick. Haley admits so but tells her that she has to be ready in case it happens. Julian and Brooke walk through a home depot store to pick out a paint color for the baby room, smiling that they are finally going to be having a child. In Kellerman's class, Nathan finds out that he has given him an "A-" and that he has see me written on the paper. When the class finishes, Kellerman informs Nathan that he would like for him to stop representing Ian as an agent and that his decision won't affect the grades he gets. Nathan tells him that Ian is a hell of a prospect and Kellerman agrees and that he wants his son to have an agent, he doesn't want Nathan to represent him.

After a few minutes, Haley says that it's time. This time, Quinn is prepared. She calmly grabs a big red kit which has all the necessities. She tells Haley that she found something in the garage and takes out a wheelchair. Haley sits in it and is impressed. Quinn asks her what she would do if neither Quinn nor Nathan were at her house and her water broke.

Haley then calls Brooke to test her. Brooke is just as bad as Quinn. She ends up dropping her keys down the drain and decides to call Julian. Haley informs her that it was just a test. Brooke says that it was a dirty trick. Now Julian gives the test. He tries to remove the keys from the drain but is unsuccessful. When Brooke asks her what he would do if it was time for Haley's baby to come he responds that he would dump Haley in the back of his truck. Haley exclaims that "it's time". He stands up quickly and faints. When he wakes, Haley tells him about the test and says that he passed. She quickly adds that he "passed. out.".

When she tries to test Nathan and Clay who are throwing small basketballs in a dustbin, they tell her that they know about her "dirty trick". She admits that it was a trick earlier but now it was really happening. They get panicked and she admits that it's a trick again.

When Brooke and Julian reach home, they find Chloe sitting and having toaster strudel. She enters their home with the key she found under the gnome statue. Brooke and Chloe have a long chat about the baby's father and Brooke asks her all the questions that she has been dying to ask.

Chuck: Where we goin'?
Chase: Dude, it's late on a school night, does it matter?
Chuck: Good point.

(Haley fakes going into labor to test Quinn)
Quinn: That was a dirty trick.
Haley: It was just a little test, and you need to be ready in case the baby starts coming and Nathan's not here.
Quinn: You cried wolf, wolf crier.

"Toaster pastry you taste so good and yummy, toaster pastry get in to my tummy, frosting doodle on my strudel, now I am going to eat you up."
"Quinn it's time."
"Huh." (With a toaster pastry in her mouth)

This episode is named after an album by Joe Walsh. Opening theme song performed by Spinnerette.

Retrieved from "https://onetreehill.fandom.com/wiki/The_Smoker_You_Drink,_The_Player_You_Get?oldid=65348"
Community content is available under CC-BY-SA unless otherwise noted.