Hey, there! You here to get to know me? I'll bet. Have fun, and welcome to my userpage!

I've always loved One Tree Hill. From the moment I first saw the Pilot, I've been addicted ever since. I've seen every episode of the series, and my favorite seasons are Seasons 1-6, Season 8, Season 9. I liked Season 7 and Season 8, but they just weren't as good as the first six. 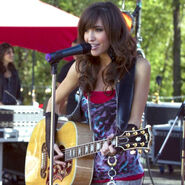 Family has been keeping me quite busy, so I won't be as active as I used to be. However, I will edit when I can. If you have any questions or concerns, hit me up with a message on my Wall and I'll reply first chance I get.

My personal One Tree Hill playlist

My review of the series - season by season

The first season, of course, will always be the best of the series because it shows how it all began: Nathan and Haley's relationship, the love triangle between Lucas, Peyton and Brooke, Nathan and Lucas' rivalry, etc.

Season Two is, tbh, one of my personal favorites. I thought it was interesting to see Nathan and Haley's marriage unravel as it did and its effects on everyone. However, I didn't like Peyton's romance with Jake.

This season was good. I was so glad that Haley came back to fight for her marriage. The second half of the season was sad as hell, what with Keith's death and Brooke finding out about Lucas' betrayal yet again. Great writing, overall.

My personal favorite. One reason I loved this season was that Lucas and Peyton finally began a stable relationship, as well as the storyline of Peyton being terrorized by Derek. That was very intense and suspenseful. I also wasn't expecting Haley's pregnancy.

...This had to be the saddest season: Q died, Haley and Nathan almost divorced, Lucas lied to himself with Lindsey... Decent season, overall.

I loved Season Six so much. Lucas and Peyton finally got married, and Brooke finally found true love and reconciled with her mother. One of the best seasons!

I liked this season, but it just wasn't the same without Lucas and Peyton. I didn't like the character of Clay at all; however, I loved the development of his relationship with Quinn. Haley's mother's storyline of her cancer and Haley's depression following her death made me cry so much.

This season could have been better. I loved Julian and Brooke's engagement, wedding and pregnancy and all, but I couldn't take some episodes of this season seriously (Valentines Day Is Over, Holding Out For A Hero, etc.)

What a brilliant season! Nathan's abduction and Haley's desperate attempts to find him, in my opinion, is what saved this season from being a bomb. The thing I hated about it? The storyline of Clay's "insomnia".