Start a Wiki
watch 01:32
The Loop (TV)
Do you like this video?
Vivian James 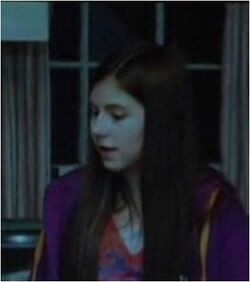 Vivian James was Haley James Scott's oldest sister. Like Haley, Quinn, and Taylor, Vivian was raised in the hectic James household with her many siblings and parents Jimmy James and Lydia James.

Vivian was born in 1978 and been raised by her open-minded parents, Jimmy and Lydia James, along with her younger siblings - three brothers and three sisters, in a small home in Tree Hill. It is possible that Vivian was the sister Haley was talking about who going around the country to look at school with her older sister as both Taylor and Quinn would have been too young to visit colleges. This would make her roughly 10 years older than Haley (Haley was 8 years old at the time). Like Haley, Vivian was above average intelligence showed as both sisters applied to Stanford; an very prestigious school. And due to her parent's financial problems it's likely Vivian was smart enough to get a scholarship to Stanford which was backed up by Taylor calling her 'smart'. ("I've Got Dreams to Remember")

When Taylor showed up at Haley and Nathan's house not long after their marriage, Nathan initially confused her for Vivian and Quinn. Showing that Haley often talking about her older sisters except Taylor. ("The Heart Brings You Back")

It may have been implied that Vivian is the oldest sister when Lydia says, when visiting the sisters, "Started with the oldest, finished with the best." It is unknown whether she attended her mother's funeral after her death, but her sisters Haley, Taylor and Quinn were the ones to spread the ashes. ("The Last Day Of Our Acquaintance") ("My Attendance Is Bad But My Intentions Are Good")

This is not Vivian as she would be with her sisters to spread Lydia's ashes. More than likely this is just a guest to the funeral.

After Vivian's second youngest sister Quinn was shot all the family came down to see her the week after the afterwards to look after her and to see if she was alright. Most of them stayed for the first week before returning to their regular lives in the care of her baby sister Haley. Quinn mentions to her partner Clay that it was a good thing that he was unconscious during the visit from her family. ("The Space Inbetween")

Vivian was raised by her parents Jimmy and Lydia James with many siblings: three younger sisters: Taylor, Quinn and Haley and three brothers. Vivian's relationship with her parents and siblings is likely to be good as all siblings have referred to having a good upbringing. Vivian possibly has children because Haley mentioned her nieces and nephews.

Retrieved from "https://onetreehill.fandom.com/wiki/Vivian_James?oldid=64760"
Community content is available under CC-BY-SA unless otherwise noted.